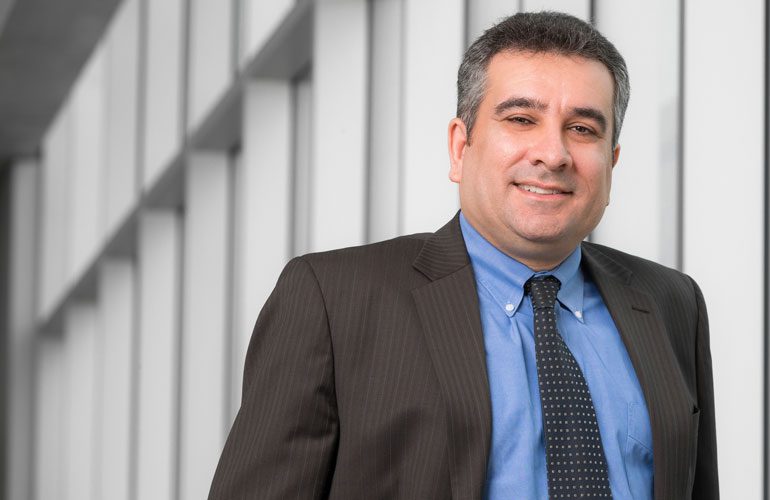 We all know the big stories. The stories of the entrepreneurs and researchers who work until they can’t work anymore. The Steve Jobs’, the Elon Musks’, the Bill Gates’- but what about the stories that we don’t know? The stories that slip under the rug, that go unnoticed, or are unheard of? The stories about overcoming failure, managing personal and work life, and paving unique paths.

We sat down with Dr. Ali Emadi, the lead faculty advisor of McMaster Engineering’s EcoCAR team to learn all about the ups and downs, the hours put in, and the journey to launching one of only two Canadian EcoCAR teams.

It all started when he was a child. Growing up, Dr. Ali Emadi was always interested in building tangible things. From building toys and small games, to setting up systems and organizations, he has always loved the process in which ideas could be developed. As Dr. Emadi grew up, his fascination for the automotive industry grew. During his undergraduate studies, he quickly realized that the world desperately needed to explore electrification for transportation, as it was an especially underdeveloped area of engineering at the time. As he continued studying this topic, it quickly became something he was passionate about -The way in which there was so much room for the automotive industry to evolve and develop.Dr. Emadi dreamed about the endless possibilities and the future of these concepts. He then went on to receive the B.S. (1995) and M.S. (1997) degrees in electrical engineering with highest distinction from Sharif University of Technology, Tehran, Iran. He also received his Ph.D. degree (2000) in electrical engineering from Texas A&M University, College Station, TX, USA.

From there, Dr. Emadi began to take off into the automotive and electrification industries. Living in Chicago, Illinois, he quickly began to build a name for himself, as he made steps into the electrification industry. In 2002, he received the Overall Excellence in Research Award from the Office of the President and the University Excellence in Teaching Award, from Illinois Institute of Technology. From 2003-2010, Dr. Emadi won a plethora of awards such as the First Place Awards in the International Future Energy Challenge for Motor Competition (2003), Eta Kappa Nu Outstanding Young Electrical Engineer of the Year (2003), IEEE Vehicular Technology Society’s Paper of the Year Award in Automotive Electronics, for the paper titled “Hybrid electric sport utility vehicles” (2004), Best Professor of the Year Award (2005), First Place Award for the Interprofessional Project titled “Hybrid Electric School Bus” (2006), Named as a Chicago Matters Global Visionary for helping to make Chicago a center for hybrid technology research, development, and application (2009), and the First Place GM Best Engineered Hybrid Systems Award (2010).

As Dr. Emadi was establishing himself in the United States of America, Canada was conscientiously putting together a new plan for research and education. In 2011, the Canadian government invested significant funding to support the creation of new Canada Excellence Research Chairs, and they identified one such chair for the automotive field. Dr. Ali Emadi was soon brought in and named Canada’s Excellent Research Chair in Hybrid Powertrains, a role that moved him away from Illinois Institute of Technology to McMaster University- which at the time, sought a lead in the transportation electrification space.

The first few years in a new space were challenging. Dr. Emadi needed to build a world-class program from the ground up. He and McMaster quickly got to work. They built the McMaster Automotive Resource Center (MARC), a new 80,000 square foot facility to focus on vehicle electrification research. Dr. Emadi stated about creating this space, “This wasn’t an overnight success, it took many years in the making… block by block, piece by piece, we created a long-term impact.“

At the time, McMaster had a Formula racing team that needed a faculty lead. Dr. Emadi told the team that he would join on one condition- that it would become a Formula Hybrid racing team. Quickly, the team agreed, and Dr. Emadi became the faculty advisor and main supporter of the team. After a few years, winning two awards for best design, the idea for the EcoCAR 3 competition came around. Dr. Emadi was instantly attracted to this competition. He soon put a team together, convinced McMaster University to support the project, and applied to the EcoCAR challenge. McMaster was then accepted and has been competing ever since.

Since the debut of McMaster’s involvement in the EcoCAR Challenges in 2014, Dr. Emadi has been integral to the team’s success. 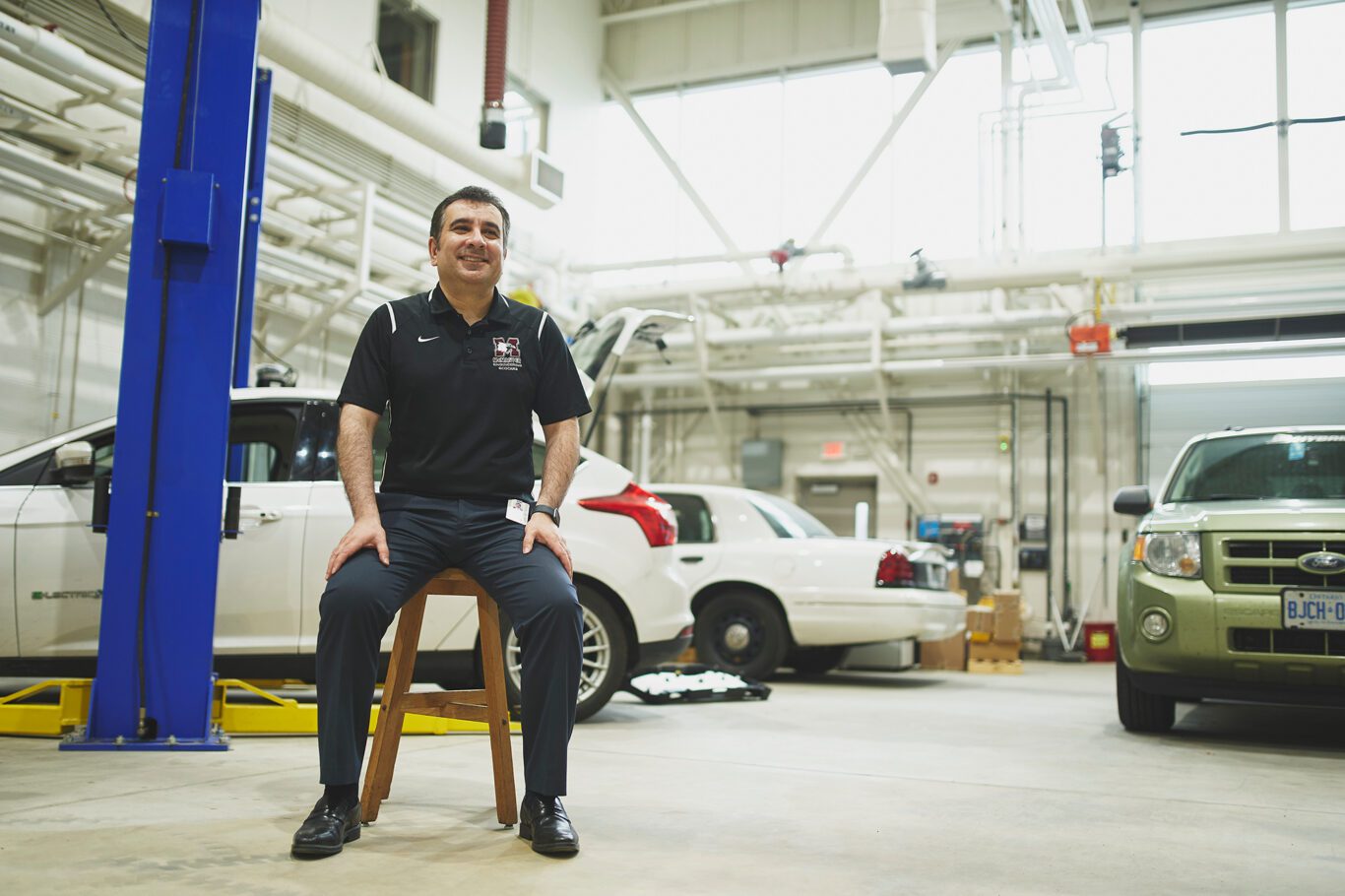 As the Lead Faculty Advisor for McMaster’s EcoCAR team, he strives to provide meaningful mentorship and guidance to the engineering students working on the challenge, as well as provide valuable insights that he has earned from his extensive research in electric vehicles (EVs) and smart mobility.

He strongly believes that his prolific career to date has built him up for success in his current role on the team. “Research, entrepreneurship, training, learning, leadership, communications – EcoCAR is the manifestation of what I do in academia”, he stated.

Although his career is full of incredible highlights and prestigious achievements, Dr. Emadi believes that EcoCAR has been one of the most joyful and fulfilling project of his to date. After more than 8 years of involvement, he has witnessed the incredible growth and improvement of the university’s team from its inception to the distinguished, well-established organization that it is today. He praises the performance of the team, comparing its efficient functioning to “a well-run electric machine, performing on its own”.

A humble contributor, Dr.Emadi attributes the success of this organization to the students behind its mission. His passion for EcoCAR is contagious, implanting a strong feeling of motivation within everyone that works closely with him. “The biggest impact you can make is the impact on people”, he says. “My role is to mentor high-potential students, bring people together, and empower them to succeed”. 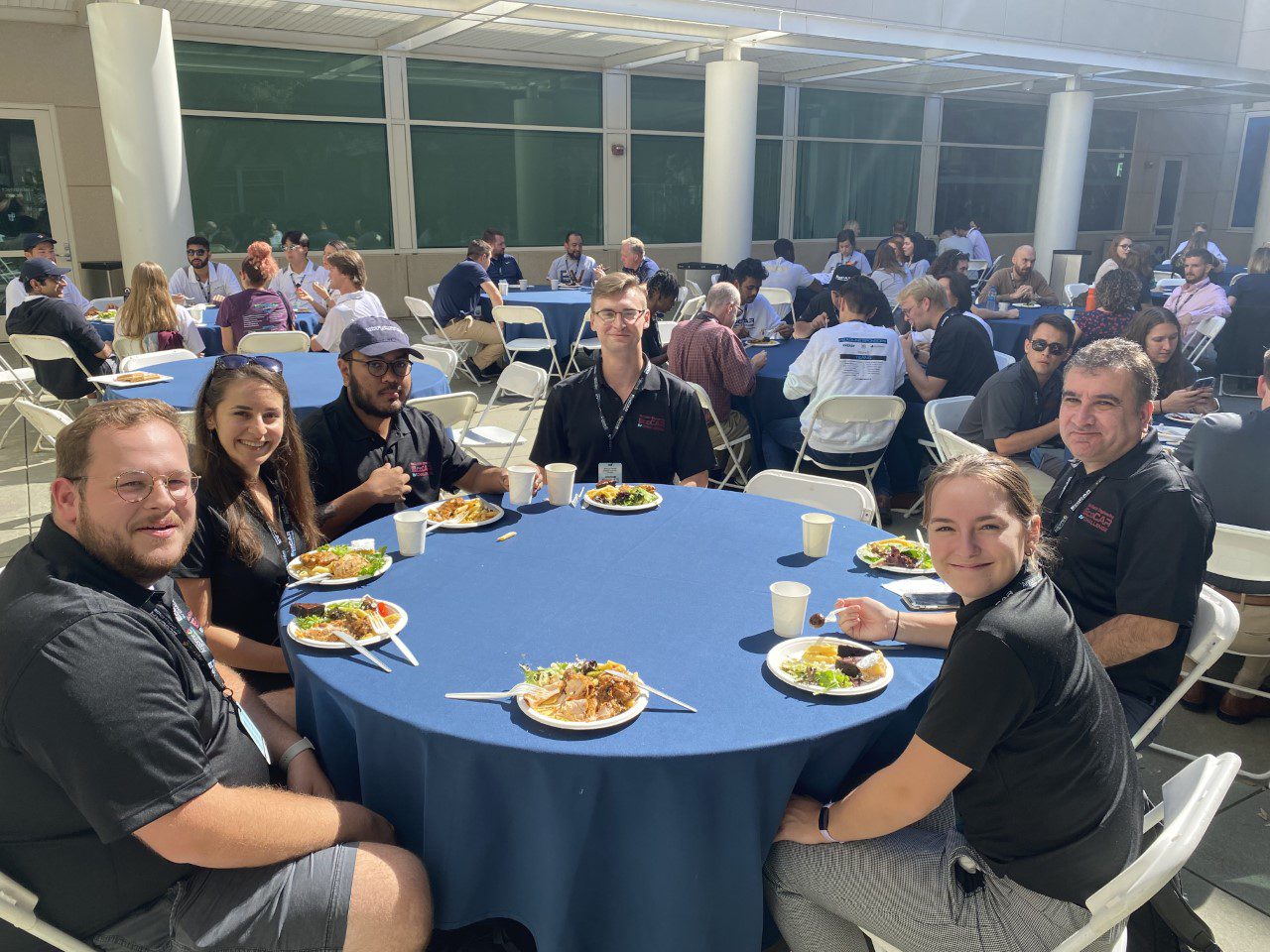 Dr. Emadi is a firm believer in EcoCAR’s powerful impact on those that engage with the organization. “Ecocar is truly a display of interdisciplinary, cutting-edge learning. The hands-on learning and experiential aspect is exceptional”. He urges students to grasp the opportunity to get involved, proclaiming “If you’re not a part of this, you’re simply missing out.”

With the EcoCAR EV Challenge underway, Dr. Emadi is excited about McMaster’s team working on an all-battery electric vehicle for the first time. “This is the future”, he stated. With his extensive background in transportation energy conversion and vehicular power and propulsion systems, he looks forward to supporting the energy efficient innovations of the team.

Dr. Emadi is also enthusiastic about the increased emphasis on diversity, equity, and inclusion (DEI) initiatives and looks forward to investing greater time and resources towards this component of the competition.

As Lead Faculty Advisor, Dr. Emadi has big ambitions and grand goals for McMaster’s EcoCAR team. “We have a really good team this year,” he says. “More than anything, I want to win!”

McMaster University is home to 32,000 students. Accompanied with each student is the drive and passion to succeed. The McMaster Engineering EcoCAR team strives to provide each and every student with the opportunity to grow, learn, and develop, while fulfilling their want for success. For every student on the team is one more future leader of this generation. McMaster EcoCAR encourages every student to invest in themselves by considering joining the team today. Check out their website at https://www.macecocar.ca/. 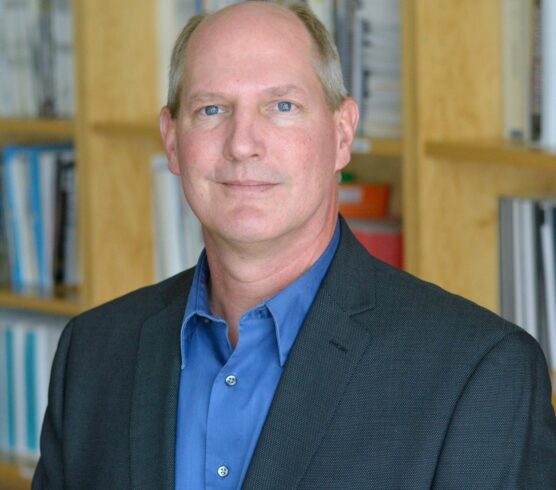 Written by: Trang Bui Dr. Matt Barth is the lead faculty advisor for the University of California, Riverside’s EcoCAR team and is also one of the key individuals who encouraged [...] 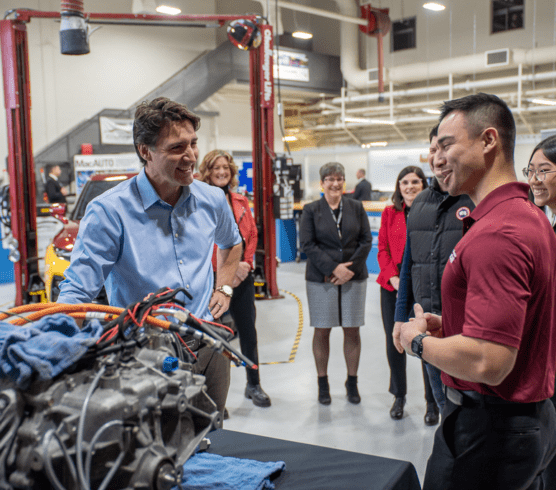 Written by: Kyle Wyndham-West On January 25th, the Prime Minister of Canada, Justin Trudeau, and cabinet visited the McMaster Automotive Resource Centre (MARC) at the end of their three-day retreat [...] 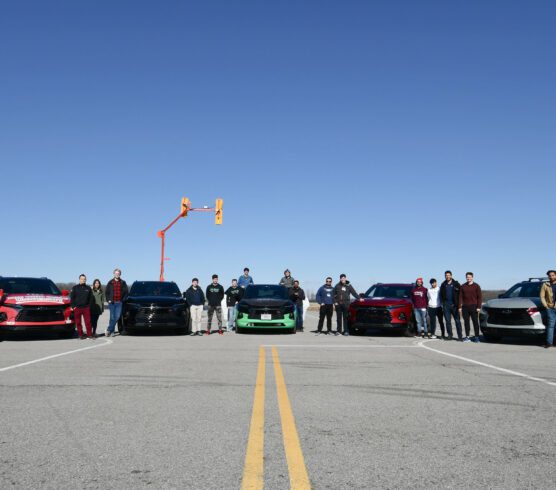 Meet the Outstanding Faculty from Embry-Riddle and Bethune-Cookman

Written by: Skye Myers, Rachel Abbott, and Marcus Cabibbo The Embry-Riddle/Bethune-Cookman team has many beloved Faculty Advisors to assist the students in all areas of the competition. Dr. Patrick Currier [...]